This image was suggested by Andras Sik’s SUPERNOVA astronomy and space research class at the Alternative Secondary School of Economics in Budapest, Hungary.

They write: “In the fretted terrains and in the eastern region of the Hellas Basin rim, many plateaus can be found surrounded by a skirt-like debris cover. These debris aprons can extend to 15-25 kilometers long; they have a convex shape, steep front slopes and differ from gravitational talus or fluvial fans. (There may be) ice cores and/or ice cement in the apron material, therefore the closest terrestrial analogs are periglacial rock (terrains). This HiRISE image shows a small part of Euripus Mons’ debris apron [at a] very high resolution so its detailed surface morphology can be investigated and compared to field observations of terrestrial rock glaciers.”

Euripus Mons is located to the east of Hellas impact basin in the Southern mid-latitudes of Mars.

A closer view of the upper portion of the image ( see subimage ; 718 x 588; 1MB), reveals that rough sharp scalloped ridges are particularly prominent. This scalloping may have resulted from sublimation of ice below the surface.

At full resolution, polygonal features can be observed ( see subimage ; 722 x 596; 1.2MB), which are characteristic of periglacial terrains. These polygons form by the contraction and expansion of the ground due to freezing and thawing of ice just below the surface during seasonal changes.

All of these features provides evidence that ice was or is present just below the surface at this location. This apron is not pockmarked with craters, suggesting it is relatively young in age.
Written by: Alix Davatzes   (6 October 2007) 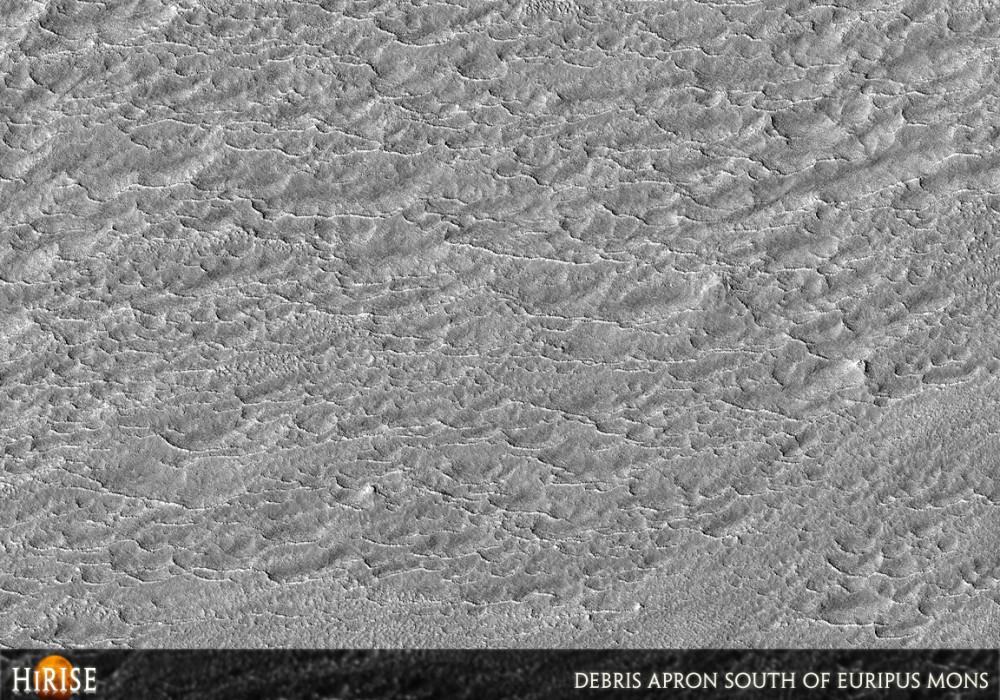