Max Fomitchev at Pennsylvania State University suggested this target. He writes, “(This image) captures an enigmatic approximately 6 kilometer-wide area in central Aram Chaos, a crater that is about 1000 kilometers in diameter located east of Valles Marineris and just north of the equator.

“The image depicts the edge of a light-toned cap unit forming two large sheets in the middle of this chaotic terrain. This cap unit (which occupies the northern half of the image; see subimage 1 ; 2024 x 1611; 9MB) is heavily eroded forming the ‘icing’ texture and terminates with a sharp approximately 300 meter cliff going diagonally across the image. Bright outcrops (yellow in the color subimage 2 ; 2024 x 3291; 19MB) on the cliff wall [may be the material identified by OMEGA as sulfates] while the exceptionally smooth dark-colored material at the bottom of the cliff is (probably dust or debris). This material is likely to have been deposited via erosion of the cap unit and (may have been) related to fluvial processes.

“In the past, the entire Aram Chaos Crater (may have) once been an ice-covered lake connected to a nearby valley via an outflow channel and underwent several episodes of catastrophic flooding. Thus, the multiple cracked overlapping layers of the chaotic terrain (may have) formed in presence of transient water and ice. Nowadays, Aram Chaos (may contain) water-rich minerals (including hematite deposits identified by TES) and thus (may) provide an ideal site for exploration of water-related processes on present day Mars.”
Written by: Alix Davatzes and Max Formichev   (10 October 2007) 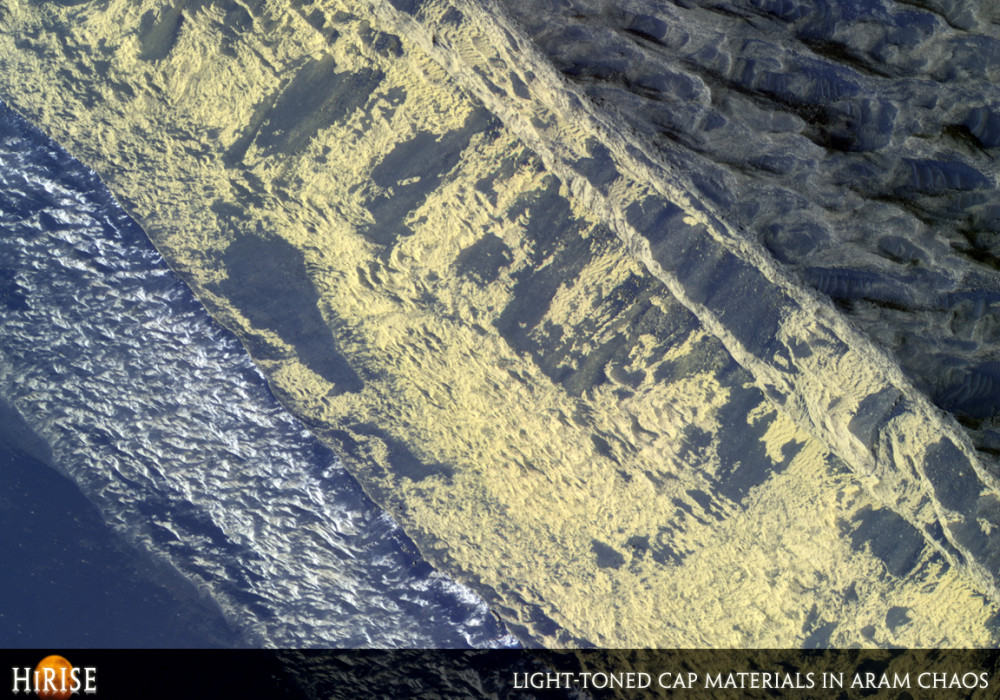