The Eastern Portion of Cerberus Fossae

Visible in this observation is a section of Cerberus Fossae (width approximately 250 meters), which are comprised of a series of rifts present located in Elysium Planitia just north the Martian equator. The fossae (Latin plural for a “ditch” or “depression”) are in close proximity and related to the formation of Athabasca Valles, which lies to the west. These rifts are collapse features believed to form by volcanic and tectonic processes.

In this composite image , we can see that the rift is not continuous, but discontinuous and offset. The offset could be the result of a preexisting subsurface discontinuity, such as a fault.

The close-up view of HiRISE infrared color shows us a plethora of information about Cerberus Fossae and the great amount of detail that HiRISE captures. The clear view of boulders strewn in shadowed areas of the rift is a testament to the high signal-to-noise capability and high resolution of the HiRISE camera; aeolian dunes along with boulders deposited from erosion of the rift walls are also visible in detail.

Using the pixel-length of the shadow within the rift, the incidence angle of the Sun at the time the image was taken, and some trigonometry, the approximate depth of the various sections of Cerberus Fossae can be estimated. Based on this simple method, an approximate depth is 260 meters. This estimate suggests that the rift is as wide as it is deep.

Another remarkable aspect of this image is the stark contrasts it captures: light-toned dusty surfaces that surround the rift versus the dark blue basaltic sands and the shadows within the rift. The detail that HiRISE can provide is indeed phenomenal, and as demonstrated here, the infrared color provides additional information. Why, for instance, is the floor of Cerberus Fossae a deep blue, and why is there such a contrast with the orange-grayish Martian surface? It’s not water! The volcanic and mafic sand contains unoxidized iron, which appears a deep blue, while the Martian surface is covered by oxidized iron-bearing dust which appears orange-grayish. 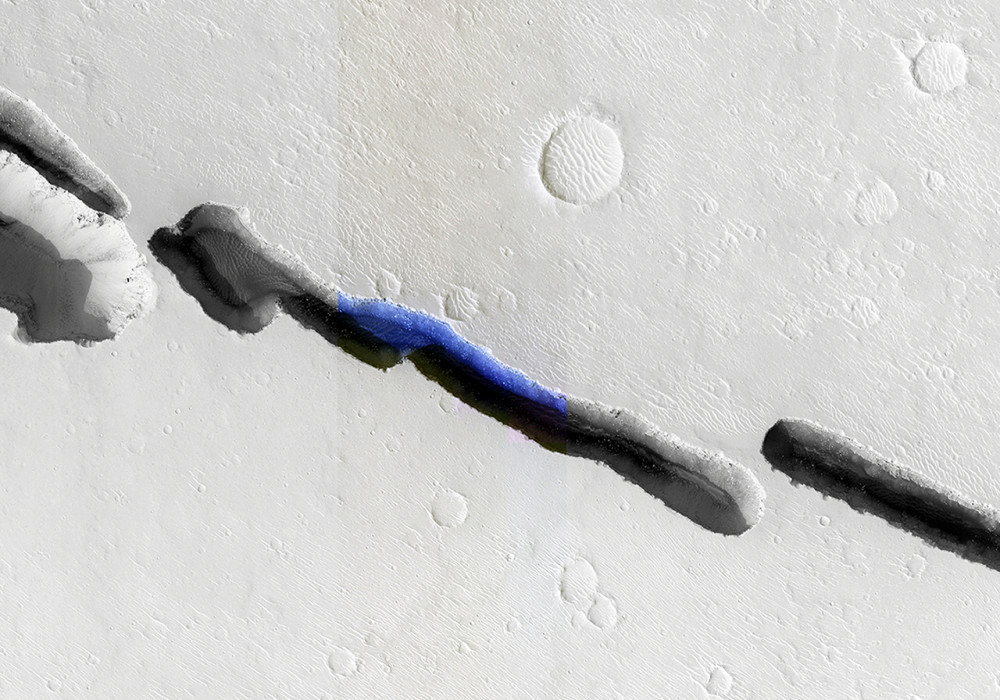