The Head of Athabasca Valles

This observation is located at the head of the Athabasca Valles channel system, which lies just north of Mars’ equator in a low-elevation region known as Elysium Planitia.

Athabasca Valles has an interesting geologic history. It was probably carved by one or more catastrophic floods of water, but more recently, a flood of lava coursed through the channel system. Both the water and the lava erupted from a few discrete points (or “vents”) along the Cerberus Fossae, a 1600-kilometer (1000-mile) long network of extensional (or “normal”) faults. The two prominent troughs that cut across the southern end of this HiRISE image are part of the Cerberus Fossae. They are distinct fault segments that overlap at their tips, as one tapers in and the other pinches out.

They were not always as wide as they are today. Erosional processes have widened the troughs over time. Major eruptions occurred along both of the fault segments seen in this image, though they occurred to either side of the imaged area itself. Lava that erupted from the western vent covers the northern half of the image. The lava has raised, lobate margins and is slightly darker in tone than the older cratered plains it embays. The lava also has a banded appearance of subtly contrasting lighter and darker tones, that correspond to variations in surface roughness. The bands are concentric to a vent located immediately west of the imaged area.

Unfortunately, vents along the Cerberus Fossae are not well preserved. 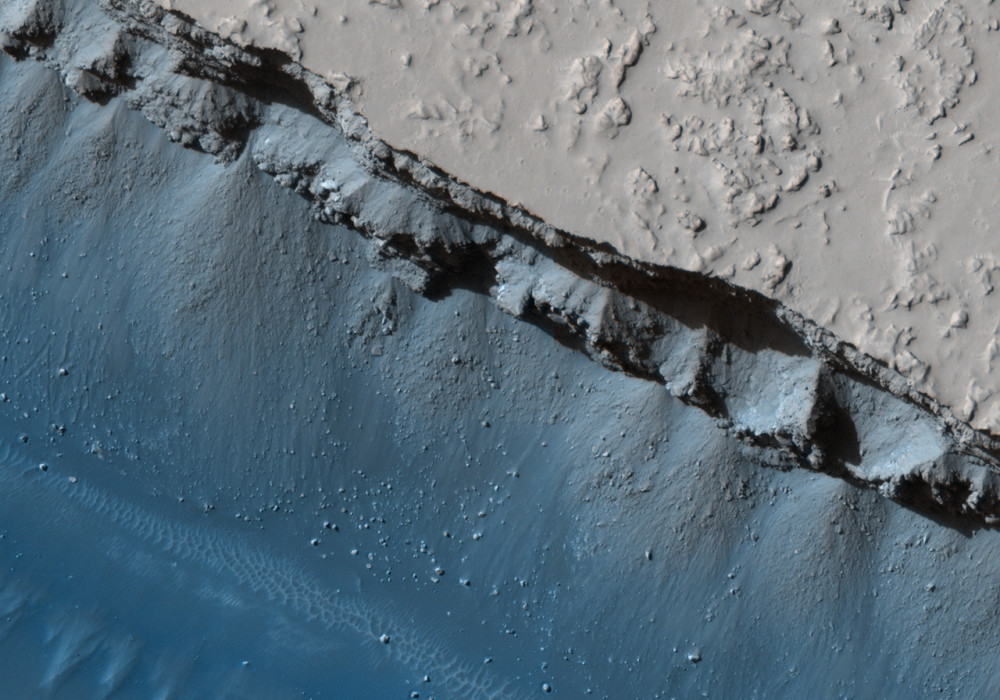