The Serpent Dust Devil of Mars

A towering dust devil casts a serpentine shadow over the Martian surface in this stunning, late springtime image of Amazonis Planitia.

The length of the shadow indicates that the dust plume reaches more than 800 meters, or half a mile, in height. The tail of the plume does not trace the path of the dust devil, which had been following a steady course towards the southeast and left a bright track behind it.

The delicate arc in the plume was produced by a westerly breeze at about a 250-meter height that blew the top of the plume towards the east. The westerly winds and the draw of warmth to the south combine to guide dust devils along southeast trending paths, as indicated by the tracks of many previous dust-devils. The dust plume itself is about 30 meters in diameter.

Numerous bright tracks trend from northwest to southeast. It is interesting to see that these tracks are bright, whereas dust-devil tracks elsewhere on Mars are usually dark. Dark tracks are believed to form where bright dust is lifted from the surface by dust devils, revealing a darker substrate.

Here in Amazonis, the dust cover is too thick to be penetrated by such scouring. A blanket of bright dust was deposited over this region recently, just before the arrival of MRO, so the surface dust here can still be moved. Perhaps the bright tracks form when the settled dust is stirred up by the strong winds generated by the dust devils (tangential wind speeds of up to 70 miles per hour have been recorded in HiRISE images of other dust devils).

It’s also interesting that this image was taken during the time of year when Mars is farthest from the Sun. Just as on Earth, Martian winds are powered by solar heating. Exposure to the sun’s rays should be at a minimum during this season, yet even now, dust devils act relentlessly to clean the surface of freshly deposited dust, a little at a time.

JPL has created a terrific video clip with some additional info about this stunning image. 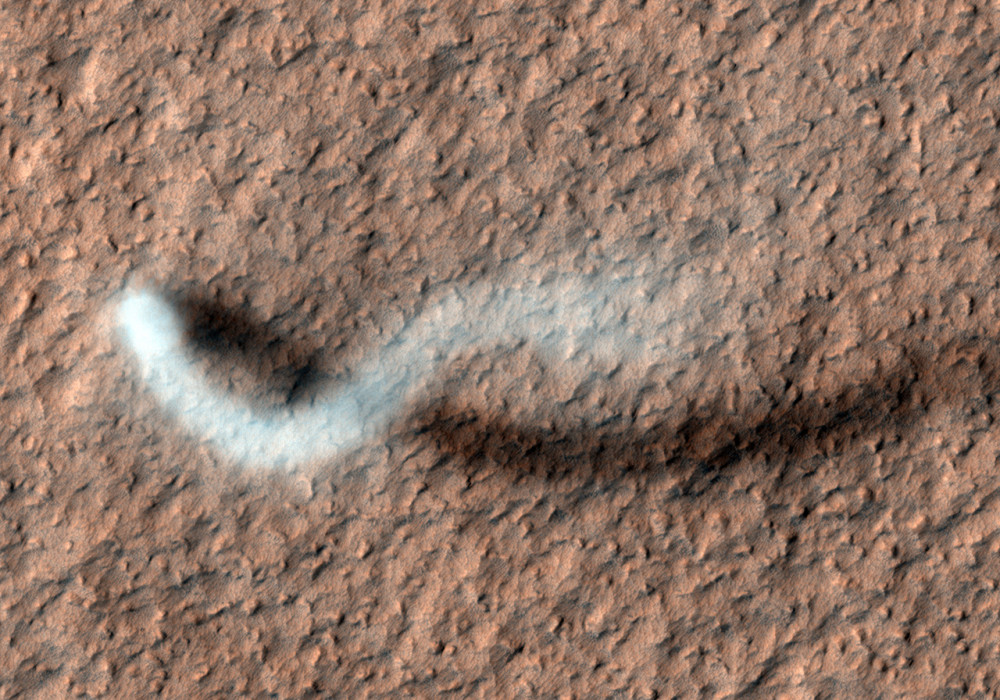