This picture of the rim of Eos Chasma in Valles Marineris shows active erosion of the Martian surface. Layered bedrock is exposed in a steep cliff on a spur of the canyon rim . Dark layers in this cliff are made up of large boulders up to 4 meters in diameter. The boulders are lined up along specific horizons, presumably individual lava flows, and are perched to descend down into the canyon upon the slightest disturbance. How long will the boulders remain poised to fall, and what will push them over the edge?

Just as on Earth, the main factors that contribute to dry mass wasting erosion on Mars are frost heaving and thermal expansion and contraction due to changes in temperature. The temperature changes on Mars are extreme compared to Earth, because of the lack of humidity in the Martian atmosphere and the eccentricity of the Martian orbit. Each daily temperature cycle and each seasonal change from summer to winter produces a cycle of expansion and contraction that pushes the boulders gradually closer to the brink.

Inevitably, the boulders fall from their precarious positions and plunge into the canyons below. Most simply slide down slope and collect just below the source layers. A few are launched along downward trajectories, travelling long distances before they settle on the slopes below. These trundling boulders left behind conspicuous tracks, up to a kilometer long . The tracks resemble dashed lines or perforations, indicating that the boulders bounced as they trundled down the slopes.

The visibility of the boulder tracks suggests that this process may have taken place recently. The active Martian winds quickly erased the tracks of the rover Opportunity, for example. However, the gouges produced by trundling boulders probably go much deeper than the shallow compression of soil by the wheels of a relatively lightweight rover. The boulder tracks might persist for a much longer time span than the rover tracks for this reason. Nevertheless, the tracks of the boulders suggest that erosion of the rim of Eos Chasma is a process that continues today. 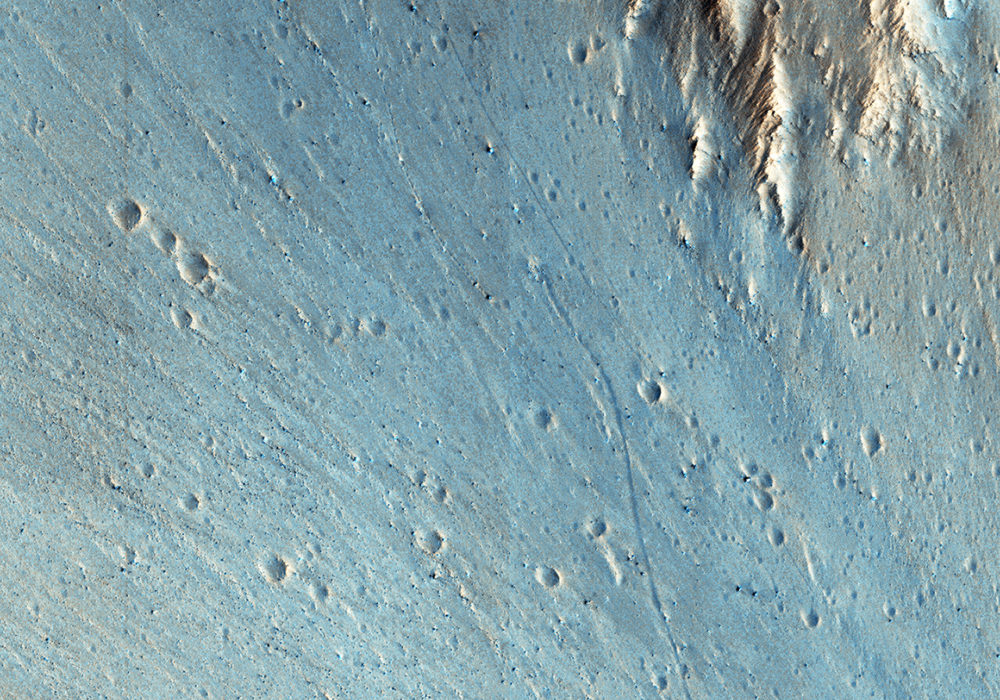