This colorful scene is situated in the Noctis Labyrinthus, perched high on the Tharsis rise in the upper reaches of the Valles Marineris canyon system.

Targeting the bright rimmed bedrock knobs, the image also captures the interaction of two distinct types of windblown sediments. Surrounding the bedrock knobs is a network of pale reddish ridges with a complex interlinked morphology. These pale ridges resemble the simpler “transverse aeolian ridges” (called TARs) that are common in the equatorial regions of Mars.

The TARs are still poorly understood, and are variously ascribed to dunes produced by reversing winds, coarse grained ripples, or indurated dust deposits. HiRISE observations of TARs have so far shown that these bedforms are stable over time, suggesting either that they form slowly over much longer time scales than the duration of MRO’s mission, or that they formed in the past during periods of very different atmospheric conditions than the present.

Dark sand dunes comprise the second type of windblown sediment visible in this image. The dark sand dune seen just below the center of the cutout displays features that are common to active sand dunes observed by HiRISE elsewhere on Mars, including sets of small ripples crisscrossing the top of the dune. In many cases, it is the motion of these smaller ripples that drives the advance of Martian sand dunes. The dark dunes are made up of grains composed of iron-rich minerals derived from volcanic rocks on Mars, unlike the pale quartz-rich dunes typical of Earth.

This image clearly shows the dark sand situated on top of the pale TAR network, indicating that the sand dunes are younger than the TARs. Moreover, the fresh appearance of the sand dunes suggest that they are currently active, and may help shape the unusual TAR morphology by sandblasting the TARs in the present day environment.
Written by: Paul Geissler (audio by Tre Gibbs)   (18 September 2013) 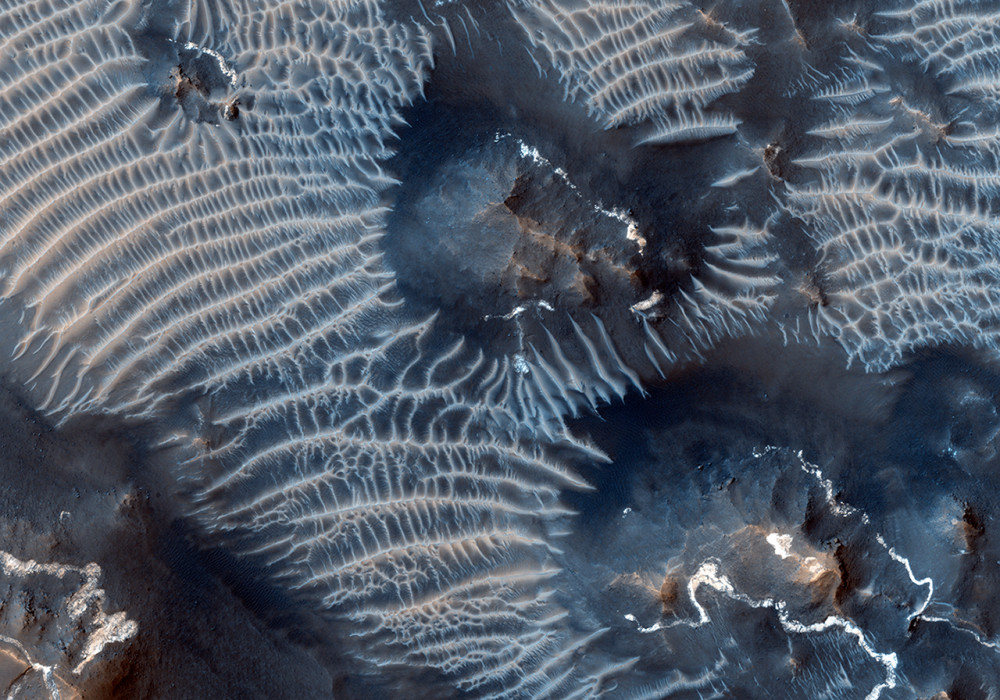