Olympus Mons is the largest volcano in the Solar System. While it is one of the youngest volcanoes on Mars, it has a complicated history. This image reveals new details of the sequence of geologic events around its base.

At the top of the cutout, there is a large hill that is surrounded by lava flows from Olympus Mons. This hill is likely to be a chunk of the older part of the volcano that was moved here by a large land slide. The lava flows along the flank of Olympus Mons had most of the lava transported through channels. These channels are preserved where the lava drained out from between the stationary walls (called “levees,” like along the sides of a contained river).

The bottom right part of the cutout has a much flatter and smoother surface. These are younger lava flows that have buried the lower part of the volcano. When lava flows form vast smooth sheets, they are called “flood” lavas.

In the bottom of the cutout, the flood lavas have odd, wiggly looking plateaus. These are parts of the lava crust that were lifted up when more liquid lava was injected into the middle of the slowly solidifying lava flow. This process is called “inflation” and is seen on many lava flows on Earth. These younger lava flows are cut by two different sets of faults. One makes the branching valley in the flood lavas and the other creates the sinuous ridge and valley along the edge of the Olympus Mons lava flows. Lower resolution images that cover a broader area suggest that the sinuous fault is an old buried structure that has been more recently reactivated. 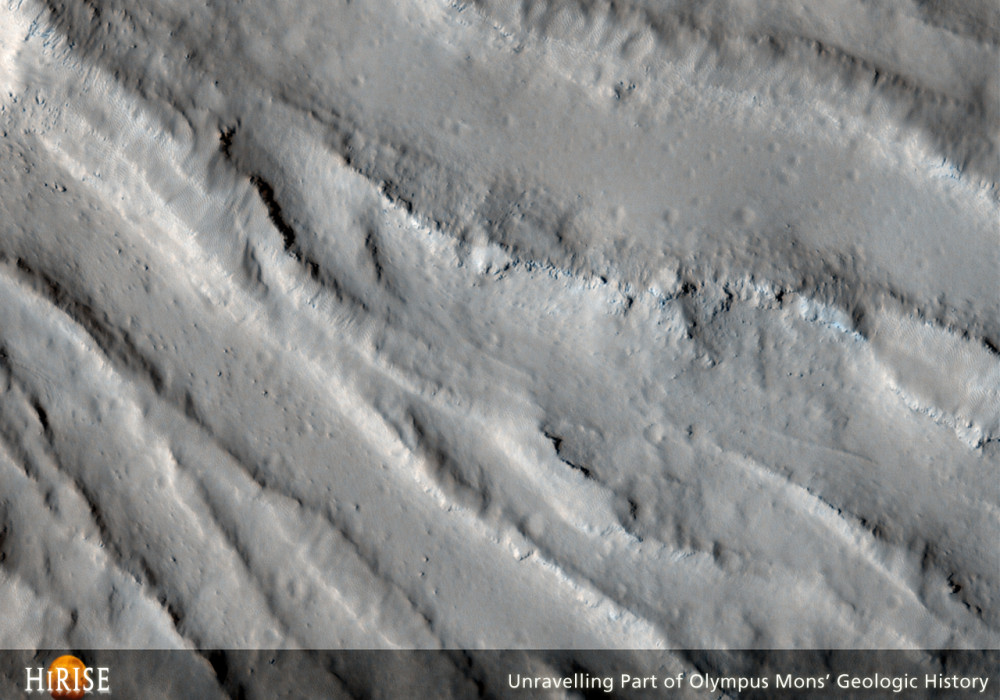