This observation, along with HiRISE image PSP_005813_2150 forms what is called a stereo pair, meaning an area was imaged from two different angles to create three-dimensional picture (see below.)

This unusual depression and the associated concentric rings are situated within an area thought to have been deposited as a mud flow. Due to the lack of a distinctive, raised rim or other impact-related features, this crater is thought to have formed by the loss of material below the surface and subsequent collapse, rather than by an impact from space.

The exact mechanism for the loss of material is not fully understood, although the missing material was likely water in some form. This feature is near a large volcano, so perhaps there were explosive magma-water interactions that violently removed the water and some magma, followed by surface collapse. Or, less violently, there could have been simple melting of subsurface ice and then collapse of the surface into the resulting void. The rays emanating from the depression suggest some amount of violence before the surface collapse that sprayed material far from the depression.

Some aspects of this and other, nearby features are similar to the collapse pits associated with Grímsvötn volcano in Iceland, which erupts beneath an ice-cap. However, there are no rays formed during the eruptions at Grímsvötn.

This anaglyph (or 3-D stereoscopic image, best viewed with red-blue stereo glasses) qualitatively shows the relative topography of and around the depression. Quantitative topographic information will be gleaned from a digital elevation model generated from this stereo pair. Such information will allow estimates of the volume loss and of the slopes of the ridges and tilted blocks that make up the concentric rings around the central depression. This information is essential in solving the mystery of this feature’s origins.

The color image shows very little color variation. This suggests that most of the feature has been covered by material all of the same color, probably dust. Written by: HiRISE Science Team   (12 December 2007) 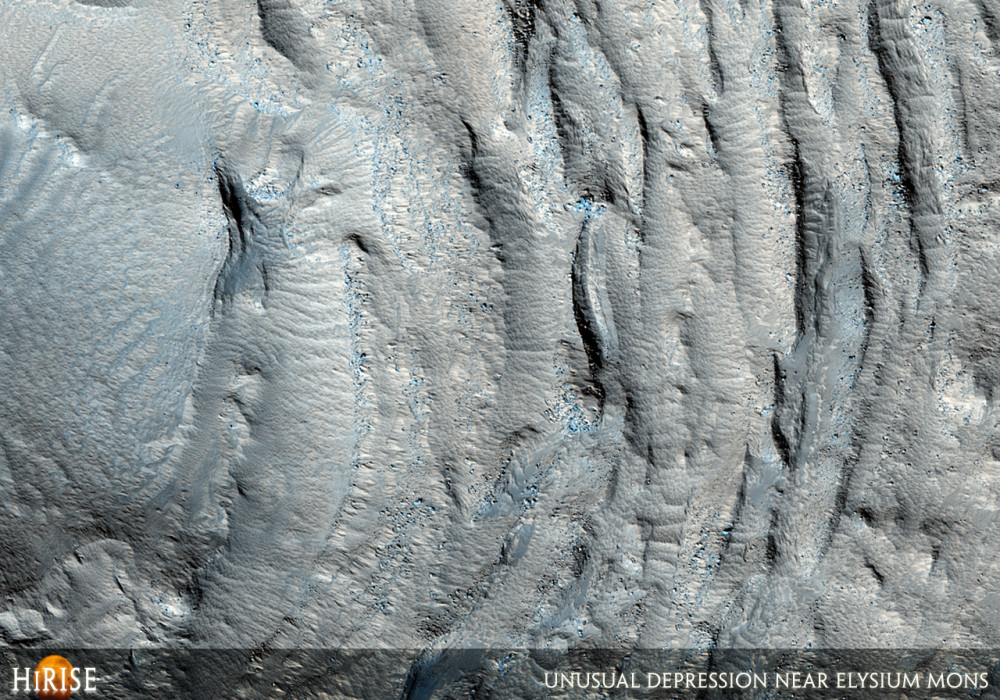