The north polar layered deposits (NPLD) are composed of a stack of ice-rich layers that is up to several kilometers thick. Each layer is thought to contain information about the climate that existed when it was deposited, so the stack of layers within the NPLD may represent a record of how climate has varied on Mars in the recent past.

We can see these internal layers exposed in the many troughs and scarps that have been cut by erosion into the stack. One of these troughs, visible in this image, contains a 500 meter (1640 feet) thick section of this layering.

However, the layers are not the only interesting thing being shown here. There is a conical mound part-way down the slope that is approximately 40 m (130 ft) high. One possible explanation for this anomaly is that it may be the remnant of a buried impact crater that is now being exhumed. As the NPLD accumulated, impacts occurred throughout its surface which were then buried by additional ice. These buried craters are generally inaccessible to us, but in a few rare locations, erosion that forms a trough (like this one) can uncover these buried structures. For reasons that are poorly understood right now, the ice beneath the site of the crater is more resistant to this erosion, so when material is removed in forming the trough the ice beneath the old impact site remains, creating this isolated hill.

An inspection of the full-resolution data shows that polygonal blocks, up to 10 m (33 feet) across, make up this mound. Although covered with reddish dust, the blocks resemble ice-rich blocks seen in other exposures of the NPLD. 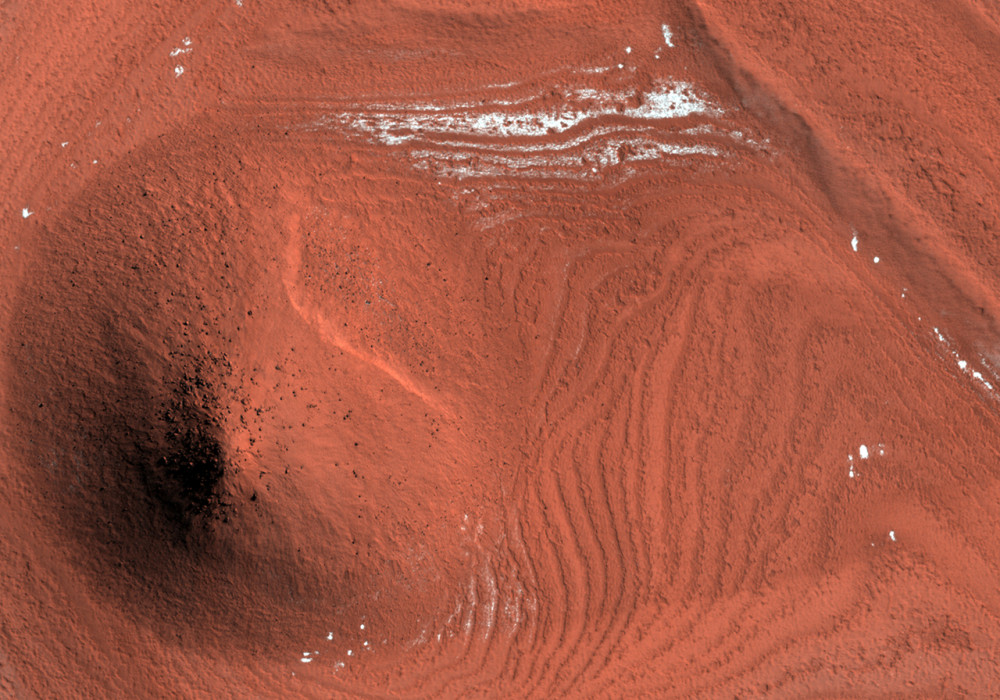