The Martian landscape often owes its existence to the influences of liquid water and ice. This observation shows a couple of landforms that may result from the loss of large amounts of ice from subsurface deposits: polygonal patterns of troughs and large scallop-shaped depressions. Collectively, such landforms are referred to as “thermokarst.”

Cold ice is generally strong and supports the weight of overlying soil. But when ice is lost through melting or sublimation, the supported surface can subside or collapse into the gradually growing cavity left behind by the lost ice. The shapes of the resulting depressions can offer us with clues (and lingering questions) to the origin of the ice.

Under the proper climate conditions ice may form and seasonally accumulate in a honeycomb network of vertical fractures that appear when ice-rich soil contracts each winter. On Earth this form of subsurface ice is called an “ice wedge.” Special conditions are needed for this ice to accumulate and develop into a large wedge, namely warm temperature and abundant surface water. A thick layer of thawed wet soil forms allowing water to percolate into the open contraction cracks within the permafrost beneath. Later, loss of this wedge ice, by for example sublimation, results in deep depressions marking the honeycomb network.

Likewise, the larger scallop depressions might point to a past climate of frozen ponds or local patches of windblown snow collected in hollows. These surface ice deposits could later be covered by the ever-shifting soils and dust. In either case, the currently bitter cold and dry climate of Mars is not conducive to forming either of these buried-ice forms. Therefore, these landforms point to a warmer, but still cold, climate in the geologic past. 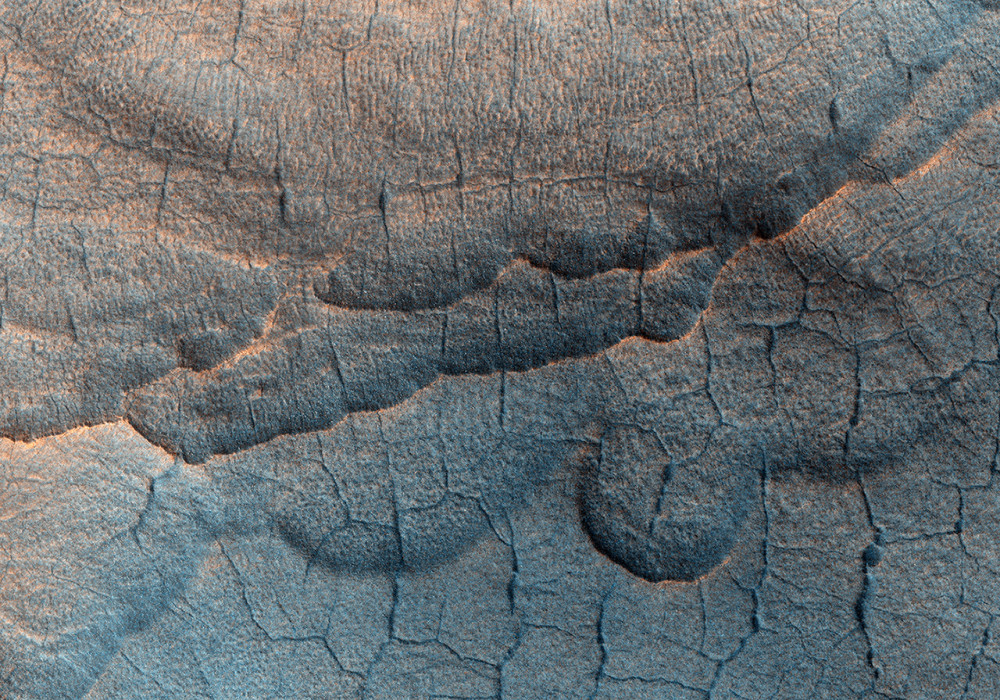