This image is located west of the Nili Fossae trough, one of the proposed landing sites for the Mars Science Laboratory . Here, we combine information from two other MRO instruments, the Context Camera (CTX) and the Compact Reconnaissance Imaging Spectrometer for Mars (CRISM), to provide insight into the geology of the region.

The first subimage shows the CTX image, with the HiRISE footprint shown in yellow. This footprint covers dark and light terrain. Looking at the HiRISE image, the dark terrain is fairly featureless in some areas, whereas other parts, when zoomed in to high resolution, show ripples, sand deposits resulting from wind activity. The lighter terrain is bedrock.

Zooming in, this material commonly has a polygonal texture. The second subimage shows the HiRISE footprint with the location, shown as a red rectangle, of a color enhanced portion of the image; this color product is visible here . It combines HiRISEs blue-green, red, and infrared filters and is enhanced to bring out detail.

By folding in data from CRISM, we can correlate the colors to materials and composition. The green and bluish colors represent a composition rich in mafic (iron- and magnesium-rich) minerals such as pyroxene and maybe olivine, with green having the greatest concentration. The green-blue material at the upper right is mostly rock, whereas the materials in the bedforms (at left) are composed of sand. The reddish materials are composed of magnesium- and iron-rich clays, possibly formed by ancient water that altered volcanic rock. In this scenario, the polygonal texture could represent cracks formed after the clays dried. CRISM also detects minor amounts of clay in the green and blue units. 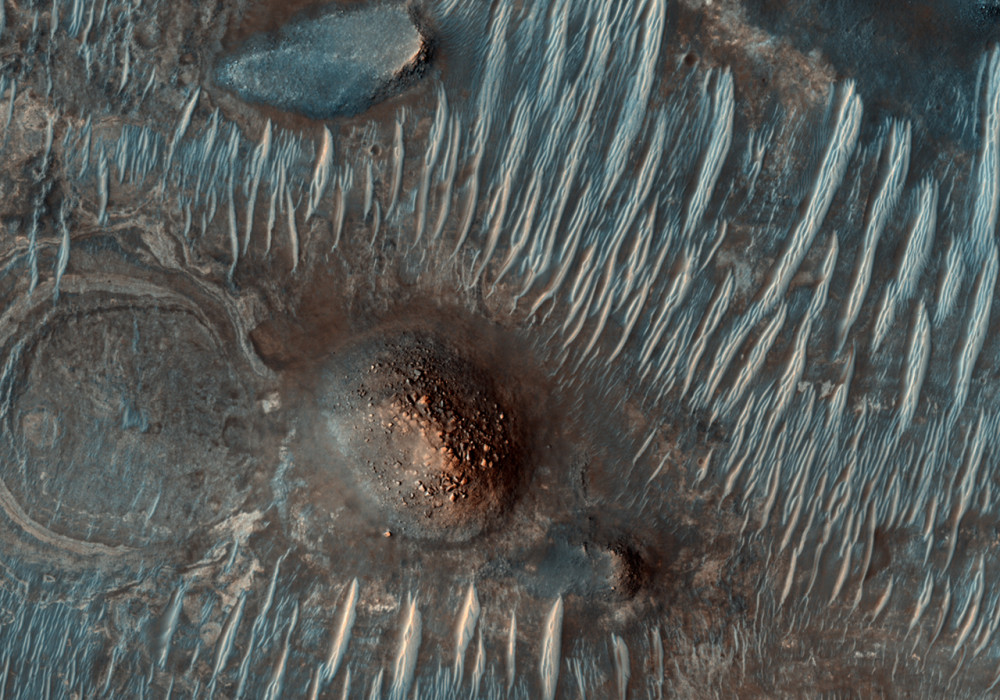