What Lies Beneath: Surface Patterns of Glacier-Like Landforms

The rotational axis of Mars is currently tilted by about 25 degrees, very similar to that of the Earth (at 23.4 degrees). However, while Earth’s axial tilt (also known as “obliquity”) tends to change very slightly over time (almost 3 degrees in 40,000 year-cycles), the obliquity of Mars is much more chaotic and varies widely from 0 to almost 60 degrees! The fact that it is currently similar to that of the Earth is merely a coincidence.

Currently, water-ice is stable on the Martian surface only in the polar regions. However, during times of “high obliquity,” that stability shifts towards the equatorial regions. We see evidence for recent periods of high obliquity on Mars in the form of features common in the mid-latitude regions, which planetary scientists call “viscous flow features,” “lobate debris aprons,” or “lineated valley fills.” These are all scientifically conservative ways of describing features on Mars that resemble mountain glaciers on Earth.

We now know from radar observations, particularly using the SHARAD instrument on board the Mars Reconnaissance Orbiter, that these features are really composed of mixtures of pure ice and dust, and as a result, many scientists have started using the term “glacier-like forms” (GLF) to describe some of them. The main reason that these feature are still present for us to observe nowadays—despite the inhospitable conditions for water ice in these latitudes—is that these “glaciers” are covered by thin layers of dust, which protect them from the atmosphere of Mars and prevents, or significantly slows down, the loss of ice through sublimation to the atmosphere.

However, if we were to take a look at this image of a “lobate debris apron,” we will see that some areas show numerous depressions, which suggests that these areas have lost some of the ice creating these “deflation features.” In addition, if we zoom in on one of these depressions , we will see surface polygonal patterns, which are common in cold regions on Earth (such as Alaska, northern Canada, and Siberia) and are indicators of shallow sub-surface water-ice. 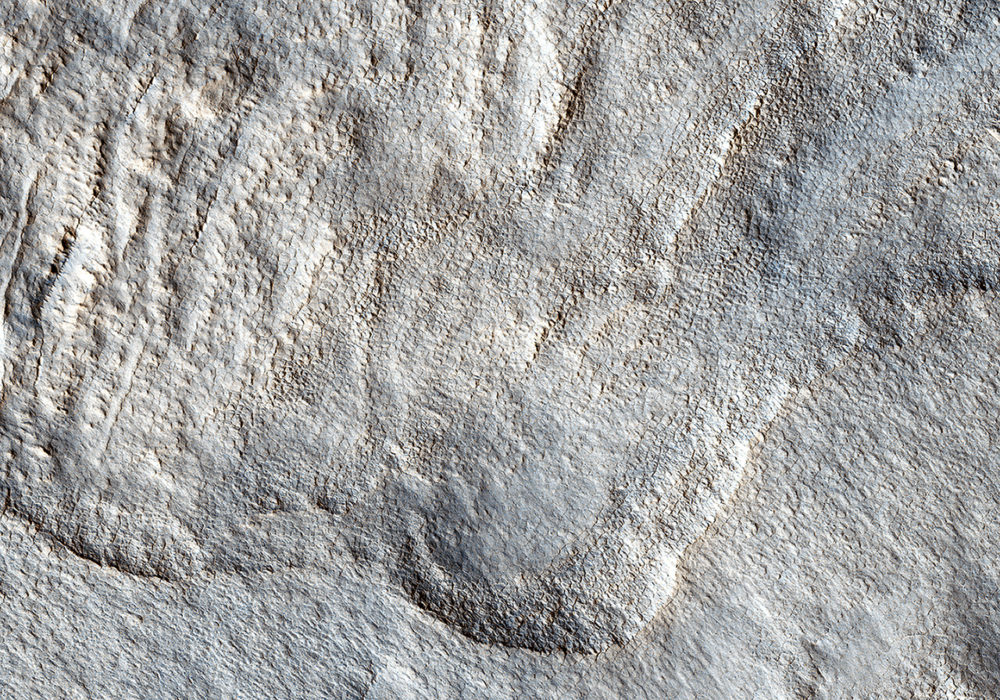