The workings of the Martian winds are visible in this image of sand dunes trapped inside an unnamed crater in southern Terra Cimmeria.

Many of the craters in the Southern highlands of Mars contain sand dunes, and HiRISE is still in the process of mapping these dunes and determining how active they are today. So far, the dunes in these craters appear to be a mixed bunch, with some dunes actively advancing while others seem to be frozen in place. This image will be compared to a previous picture , to see how these dunes have changed since 2008.

The sand dunes are the large, branched ridges and dark patches that are conspicuous against the bright background, particularly in the northwest corner of our picture. There are also signs of two other wind-related processes: smaller, brighter ridges line the floor of the crater in regularly spaced rows. These are also windblown deposits, mysterious “transverse aeolian ridges” or TARs that are more common in the Martian tropics. Faint, irregular dark lines cross the dunes and the TARs, marking the tracks of dust devils that vacuum the surface during southern summer. So, which came first? We can untangle the history of these processes by looking at the picture more closely.

Over most of the image, it is obvious that the dark sand dunes bury the bright TARs, meaning that the sand dunes are younger than the TARs. But this relationship is not so clear for the southernmost dune we see in this picture . Here, the TARs look like they extend into the dune and merge with ripples on the dune’s surface, suggesting that the TARs might be younger than the dunes. The question can be resolved by carefully examining an enhanced color cutout. The TARs are brighter and redder than the sand dunes and this color persists on the crests of the TARs as the sand encroaches, burying the valleys first and then the slopes and finally the TAR crests. This tells us that the unusual appearance of the dune margin is caused by burial and exposure of the older TARs by the younger sand. Finally, you can trace the tracks of dust devils crossing over the dunes, telling us that they are younger than the dunes.

So, first came the TARs, next the dunes, and last the dust devils — probably within the last few months! 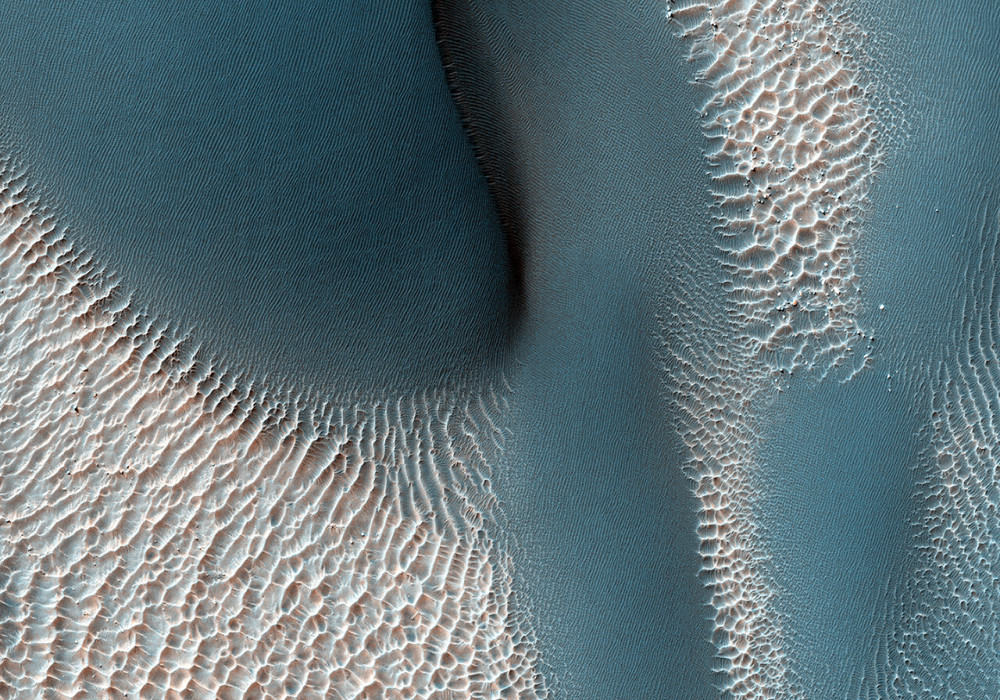