This high latitude image shows a portion of the landing ellipse for the Mars Scout spacecraft Phoenix as seen during late winter on Mars. Phoenix will land somewhere within the ellipse on Memorial Day, 2008, but probably not within this image.

While the Phoenix lander will land in mid-spring and operate through the Martian summer, the current winter landscape looks somewhat different. The Sun is beginning to rise from the winter night and is only 10 degrees above the horizon to illuminate the surface in this image. As a result, what few rocks are present cast noticeable shadows, and every bump and undulation of the surface, now matter how small, is accentuated.

In this winter image, a blanket of carbon dioxide frost (dry ice snow) about a foot deep covers the surface. Bright patches in the image are areas where the frost is relatively clean, while in darker areas over much of the image, the frost is either dirty with atmospheric dust or the frost is somewhat translucent allowing us to see a little of the soil surface.

Summertime images of this region show that small hexagonal and polygonal patterns a few meters (yards) in size ubiquitously cover the entire region. These patterns are the result of annual thermal contraction in ice-cemented soil forming a honeycomb network of small fractures below the surface that manifest themselves as small shallow troughs at the surface. Interestingly, these patterns are not visible in this image. The shallow troughs that mark the polygons are currently filled in with carbon dioxide frost making them virtually invisible. As spring approaches the carbon dioxide frost will slowly sublimate (changes directly from ice to gas) and the polygons will once again become visible.Written by: Mike   (27 February 2008) 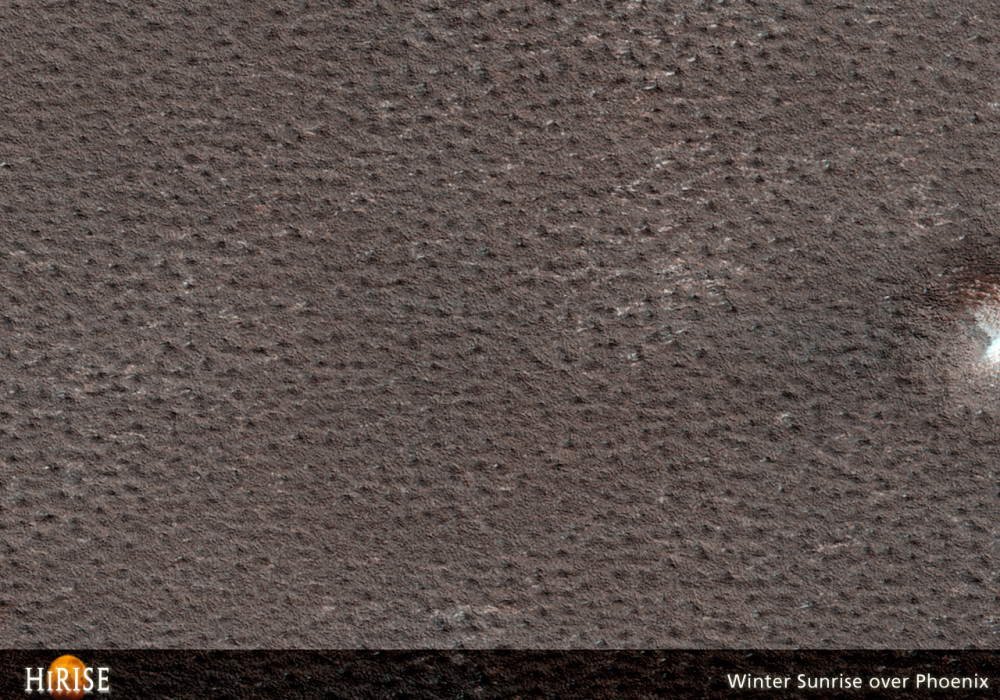