The crater’s rim-to-rim diameter is approximately 3 kilometers (1.85 miles) with a depth of about 620 meters (0.4 miles), and its rim rises about 200 meters (656 feet) above the surrounding lava-filled plains of Daedalia Planum, just southwest of the great Tharsis volcanoes. (For an appreciation of the dimensions of this crater, see the anaglyph for Zumba. ) Zumba is approximately 25 percent deeper than the average Martian crater of this size — just one of several attributes that suggests it is a very fresh crater.

One estimate of Zumba’s age, generally accomplished by counting smaller superimposed craters on Zumba itself, suggests it may be 5 million years young. Even if such an estimate is off by 2-4 times, this is still a young geologic feature by Mars standards. Because Zumba is so young and so fresh, it is a perfect example of a simple crater. On Mars, a simple crater is generally less than 6-9 km (about 3.7-5.6 mi) in diameter with a âsimpleâ conical-bowl shape, minimal wall collapse, and lacking a well-developed central feature (e.g., a peak, large pit, or ring).

By impacting into such hard durable rocks, the impact that created Zumba scattered greater than 10 million ejecta blocks at high speeds resulting in far-reaching ray segments and an impressive field of secondary impact craters ( see the subimage ). This pattern is hard to see in visible-light images, but âlights-upâ spectacularly in nighttime thermal infrared images taken by THEMIS onboard the Mars Odyssey 2001 Orbiter ( see Gratteri Crater’s Far-Flung Rays ). Scientists believe that some of these high-speed rocks may have even been expelled from Mars and even traveled to Earth (see Did Martian Meteorites Come From These Sources? ).

Zumba is of considerable interest to scientists, whether it’s a source of Martian meteorites or not, as it possesses interesting features that are typically buried or eroded away in other older Martian craters, and even within the freshest terrestrial craters (including Meteor crater in Arizona; see Meteor crater in Google Earth: Meteor crater.kmz ). These preserved and newly recognized features observed at the scale of HiRISE may reveal aspects of the impact process unknown to scientists from previous studies of craters on the terrestrial planets.

What is particularly intriguing is the presence of a pitted deposit giving Zumba the appearance that it has a relatively flat floor despite the pits. These crater-fill deposits are typically composed of lightly to highly damaged rock fragments and impact melts formed from the high temperatures achieved from the energy released by the impact event (i.e., on the order several to tens of megatons). The pits in the crater-fill deposits have not been recognized within lunar or terrestrial craters and appear to be unique to crater-fill deposits in only the freshest and best-preserved Martian craters.

These pits may represent the result of the interactions of the very hot crater-fill deposits with water and water-ice that may have been present in the subsurface prior to impact. It is not well understood whether these pits form explosively (similar to terrestrial volcanic pits/craters formed from the interaction of hot lava with wet sediments/deposits), or by collapse from the drainage of impact melts or volatiles. The presence of pitted deposits in only the freshest and well-preserved craters suggests that they are likely related to the impact process.
Written by: Livio L. Tornabene   (13 May 2009) 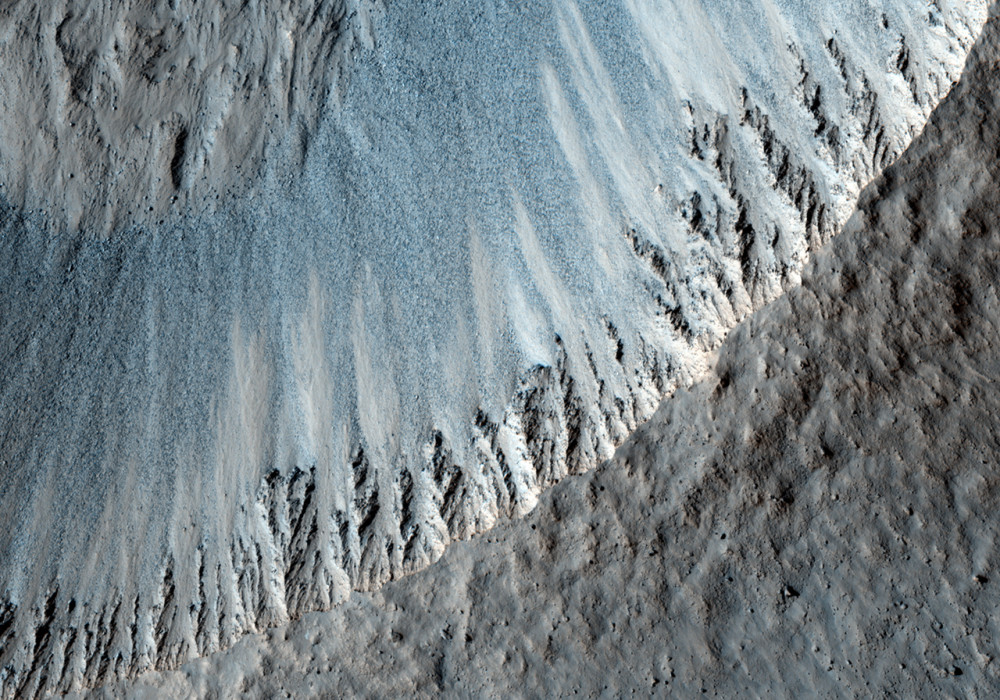